To share your memory on the wall of Robert Morrow, sign in using one of the following options:

Bob was born on February 16, 1933 in Watertown, CT a son of the late Robert E. and Loretta (Blanchard) Morrow and graduated from Watertown High School. Bob worked as electrician for over 40 years at Watertown Manufacturing and Sherwood Medical, retiring in 1995. Bob enjoyed boating, fishing, hunting, walking trails with his favorite lady, his wife Mickey; camping, country festivals, bike riding and his dogs Tucker, Oliver and Tylor. Back in the day, he enjoyed riding his Harley and Indian motorcycles.

All services will be private and there are no calling hours. Arrangements have been entrusted to the Buckmiller Thurston Mengacci Funeral Home, 82 Fairview Avenue, Naugatuck. In lieu of flowers and to honor Bob’s memory, donations can be made to Live Well Dementia Specialists, 1261 South Main Street, Plantsville, CT 06479 or at www.livewell.org.
Read Less

To send flowers to the family or plant a tree in memory of Robert C. Morrow Sr., please visit our Heartfelt Sympathies Store.

There are no events scheduled. You can still show your support by sending flowers directly to the family, or planting a memorial tree in memory of Robert C. Morrow Sr..
Visit the Heartfelt Sympathies Store

Mr. and Mrs. Robert Berube, Stanley Black & Decker Industrial Leadership Team, and other have sent flowers to the family of Robert C. Morrow Sr.
Show you care by sending flowers

Posted Apr 08, 2021 at 11:06am
Thinking of you during this difficult time. Deepest condolences to you and your family.

Posted Apr 07, 2021 at 04:32pm
To Michael and family: My sincerest condolences. Sending prayers for comfort and strength during this difficult time ~

Posted Apr 07, 2021 at 02:12pm
To Kelley and Family - Please accept our warmest condolences. I hope this message finds you surrounded by strength and compassion. With Love

Posted Apr 06, 2021 at 10:13am
grandpa,
you made everyone no matter what was going on where it was something sad you still said something to get everyone to laugh. Every time I saw you the first thing that you would as is “have you been walking in cow manure” and use your hand to show how tall I am compared to mom and gigi. Then you would ask me if “do you remember what noise a annoys a noisy oyster?” I’d answer you back with “a noisy noise annoys and oyster” and we would laugh. Another thing you would always as me is “how long is a string” I’d answer “twice as long as it is from one end to the other end as it is to the middle” once again we would laugh. those were our jokes that we would ask each other every visit. Thank you Gramps for giving me jokes to pass on to my children when i’m old enough to have them, and thank you for helping me pass my history classes with your 3 hour lectures.
As you always said, see you all of a sudden love you since the day (you) I was born, love you always.
Tori
Comment Share
Share via: 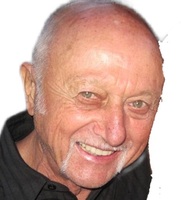