To share your memory on the wall of Anthony D\'Amato, sign in using one of the following options:

Anthony leaves behind his stepchildren Casey Nicholson and her daughters, Jeremy Nixon and his sons, and Chloe Nixon; his mother-in-law Arline Best as well as Jamie’s brothers and their wives and children. He is also survived by his former wife, Carol D'Amato and his long-time friends Reggie Brulotte and Alan D’Amato (cousin).

Anthony was born on April 24, 1948 into a large Italian family in West Haven, CT. He grew up surrounded by cousins who would remain his friends throughout his life. From the day he was born, Anthony was an avid woodsman, preferring the solitude of the wilderness to social gatherings. He grew up hunting with his Dad, a hobby he continued until right before his passing. He loved collecting firearms and coins. Anthony was an innate dog lover, having owned myriad of dogs throughout his life. A year ago, he brought home two Brittany puppies, Ralph and Alice who brought such joy to him, particularly on his two-week hunting trip in November. He was very proud of how well they hunted, and he talked endlessly about them.

He attended St. Lawrence School in West Haven, Notre Dame High School, West Haven, CT, Class of 1966, St. Michael’s College, Colchester, VT, Class of 1972. He earned a master’s degree in education from Southern Connecticut State University and served in the National Guard as an MP and shared fond memories of time served. He was a proud patriot, American, and chef of Italian cuisine who insisted he made the best sauce. Anthony taught middle school science in East Haven for 7 years and then became a Mainframe Programmer at Travelers Insurance Company and United Healthcare for close to 40 years before retiring a few years ago.

Anthony was deeply loved by his family and friends and will be missed dearly. When saying goodbye, he would always say, “take it easy.” We will remember that sentiment now more than ever as a reminder to not dwell on his passing with sadness. He would want us to be kind to ourselves and others, even in the most difficult of times.

Services will be private but the family hopes to hold a memorial this summer. Arrangements have been entrusted to the Buckmiller Thurston Mengacci Funeral Home, 82 Fairview Avenue, Naugatuck. In lieu of flowers, donations can be made to Wounded Warrior Project, P.O. Box 758516, Topeka, Kansas 66675-8516, a cause he was passionate about.
Read Less

To send flowers to the family or plant a tree in memory of Anthony F. D'Amato, please visit our Heartfelt Sympathies Store.

There are no events scheduled. You can still show your support by sending flowers directly to the family, or planting a memorial tree in memory of Anthony F. D'Amato.
Visit the Heartfelt Sympathies Store

We encourage you to share your most beloved memories of Anthony here, so that the family and other loved ones can always see it. You can upload cherished photographs, or share your favorite stories, and can even comment on those shared by others.

Posted Dec 31, 2020 at 05:00pm
I hunted with Tony at his Uncles and then we bowhunted at Sugarbush Farm in Vermont. Lots of great and funny stories and warm memories. He was in our poker group and when we went to St. Mikes together we were roommates. Ihad a lot of fun with Tony and will miss him, his stories and great sense of humor.
Comment Share
Share via:
BB

Posted Dec 31, 2020 at 09:47am
Anthony, even though we were cousins, you always treated me like a younger brother. From teaching me how to shoot and hunt in my young teenage years and as we got older our five minute telephone calls that turned into an hour. No one but us will ever know what we spoke about. So sleep in peace my friend, my cousin, my brother until we see each other again. Take it easy.
In my thoughts and prayers, Cousin Alan.
Comment Share
Share via:
DN

Posted Dec 30, 2020 at 08:46pm
In memory of Anthony (Tony) D Amato Sending our condolences and our love. May his memory live on in his family. Doreen & Donald Nortman 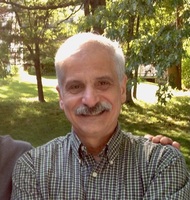