To share your memory on the wall of Grace Phelan, sign in using one of the following options:

Naugatuck - Grace E. (Phillips) Phelan, 95, widow of the late Gregory J. Phelan, Sr., who died in 1973, died comfortably and at peace, surrounded by her loving family, on December 27 at the Middlebury Convalescent Center in Middlebury, CT.

Grace was born in Manhattan on Valentine’s Day 1923, daughter of the late Howard and Grace (Stauch) Phillips and lived in Naugatuck for most of her adult life. Following her husband’s death, Grace forged a new life for herself, and became a nursing aid at the Middlebury Convalescent Center. Grace’s mission in life was to serve God, her family, her country, and care for others.

During WWII, Grace left her home to contribute to the war effort and worked making self-sealing bullet proof treads for tanks being sent to the front lines, as well as riveted fuel tanks for use in warships and bombers. She was our cherished “Rosie the Riveter”, and a proud American.

During good times and bad, Grace was the rock and foundation of her family. There was always room for one or more at her dinner table, and extra food for those in need. During her life, Grace opened her home to family members as well as strangers during hard times.

Grace was an accomplished golfer both here in Connecticut as well as her years in Florida. She loved family gatherings in Naugatuck and Old Saybrook. She was happiest when surrounded by family and dear friends, and especially by a never ending entourage of family pets, including her faithful dogs, Freckles and Chante. In addition, she was a member of St. Mary’s Church Alter Society, the Women’s Council at St. Francis of Assisi Church and the Women’s Club.

Until recently, Grace made trips to Arizona, Philadelphia, Boston, New Jersey and the Grand Canyon to visit family.

Grace’s family would like to thank the staff at Middlebury Convalescent Home for the love, compassion and care that they extended to Grace while she was a resident.

A Mass of Christian Burial will be celebrated Thursday, January 3rd at 10 AM at St. Mary’s Church at 338 North Main Street, Naugatuck. Everyone is asked to kindly meet at the church. Burial will follow in St. James Cemetery. Calling hours are Wednesday from 5-8 PM at Buckmiller Thurston Mengacci Funeral Home, 82 Fairview Avenue, Naugatuck. In lieu of flowers and to honor Grace’s memory, contributions may be made to the American Heart Association, 5 Brookside Dr., Wallingford, CT 06492.
Read Less

To send flowers to the family or plant a tree in memory of Grace E. Phelan, please visit our Heartfelt Sympathies Store.

We encourage you to share your most beloved memories of Grace here, so that the family and other loved ones can always see it. You can upload cherished photographs, or share your favorite stories, and can even comment on those shared by others.

Posted Dec 30, 2018 at 08:05pm
My heart goes out to you all: Greg Jr., Donna, and Jennifer, and the entire Phelan family. Grace was truly one of the loveliest, kindest, and genuine ladies that I have ever had the pleasure of knowing. In your deep sadness, please know that the Good Lord blessed you all with His very best. Fondly, Susan (Dowling) Farrow
Comment Share
Share via:
RL

Posted Dec 30, 2018 at 07:14pm
Our deepest condolences to the entire family. "Those we love don't go away, they walk beside us everyday, unseen, unheard, but always near, still loved, still missed and very dear." Ms Gracie will be missed by many, she was one of a kind, may she rest in peace. Love & hugs to our bff's, were always here for you....
Rita & Bob Legan, Weddington, NC
Comment Share
Share via:
KD

Posted Dec 30, 2018 at 11:49am
Our sincere condolences to the entire Phelan family and to Greg, Barb and Jennifer especially. Hugs to you all. Kim & Rick Dore
Comment Share
Share via:
P

Posted Dec 29, 2018 at 02:33pm
Grandma - I know that it troubled you to leave us, and that you fought to remain by our sides. We will all carry on with the grace, dignity, and strength that you bestowed upon us during your beautiful (nearly) 96 years with us. You have left us with the unwavering spiritual compass that you carried your entire life, and one that will guide me through to my final breath - when you greet me and shepherd me home. 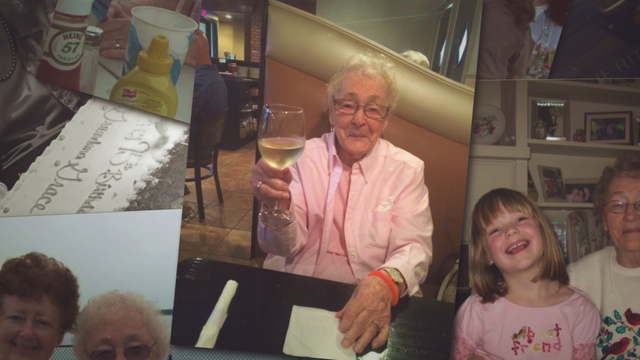